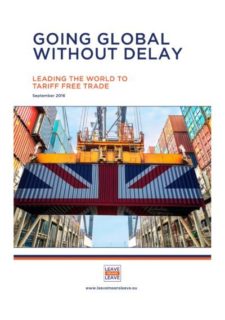 The Leave Means Leave report, ‘Going Global Without Delay’, launched today rejects the so-called Norway and Swiss options for a trade deal with the EU because they are unsatisfactory and such arrangements would not allow the UK to regain control over its borders.

Instead, it urges ministers to attempt to secure a zero tariff free trade deal (similar to the deal Canada is set to sign at the end of October) with the EU once they have set in train the formal process of leaving by triggering Article 50 of the Lisbon Treaty.

They should also make it clear at the outset that if no deal was reached with the maximum two years timeframe for negotiations, Britain should go it alone, trading with the EU under World Trade Organisation rules and seeking a Free Trade deal with other nations and blocs.